It wasn’t a cold and rainy night—but what the heck, in 1992 a group of PWD owners began to congregate and decided that a club might be a good thing. A club to recognize and idolize (are you kidding?) our PWDs. Personally, I have always thought that the real reason to form a club was that owning a PWD made one a prime candidate for a support group (perhaps even a 12 step program). I mean really, can you imagine describing PWD antics to someone owning a Golden or a Labrador? They quite simply don’t understand counter surfing and the fact that our dogs express their opinions and it IS best to not ignore them!

Anyway, I digress. By 1993 we were already thinking we should do SOMETHING wonderful . . . the very first National Specialty had been held  in 1991 in Princeton, New Jersey, many of us went. We brought guacamole and chips (really, did we think that we couldn’t buy tortilla chips in New Jersey?) Well, we brought them anyway – and artichokes too! Symbols of California hospitality?

Now then back to 1993, we held our first Supported Entry at the Santa Rosa show in Fall of the year. But wait, we weren’t really just holding a supported entry — we were auditioning for our very first National Specialty—oh my, we had gone over the edge! Several PWDCA officers came out to see what we could do. The PWDCA actually granted us the 1994 National Specialty to host based on our fine performance at the Supported Entry in 1993. From 1993 until 1994 we worked feverishly to put together such a Specialty as the Easterners had never before seen.

We must have been nuts! We started planning for our Specialty at the December Holiday Party with the auction of two painted ornaments—they brought in a total of $65 and with that mega (not) handful of cash, we began planning a national specialty! And we pulled it off! We hosted the Specialty at the Marin Civic Center in San Rafael, our host hotel was the Embassy Suites and the water trial was held at nearby China Camp. What were we thinking — hold the water trial in salt water? Yes, we did prove to those ‘other’ coast people that PWDs could swim and compete in salt water (it’s really brackish as there is a river outlet nearby). We had a fabulous Specialty and hosted the VERY FIRST AKC Agility trial West of the Mississippi and only the second AKC agility trial ever held anywhere!

Through the remainder of the 90’s our Club continued to grow and prosper. We added new members and began new activities. To help raise money we put on an annual all breed obedience fun match each Fall. We had as many as 16 rings operating simultaneously. The money raised bought water trial equipment and obedience equipment and helped us pay the bills. Our biggest bill at the time was the storage locker in which we kept all that purchased equipment. Our August water trials became a standard of excellence. Our annual holiday bash at Happiness Kennels always fell on a very rainy day and we always had a great time with upwards of thirty dogs participating in relay races, opening gifts and having their pictures taken with Santa.

In 1997 our club worked cooperatively with the Pacific Northwest Club and ran one day of their water trial at the National Specialty they hosted. By the end of the 90’s we were in a feverish pitch to again put in a bid for a national specialty. In the year 2000, our Club hosted the National Specialty in Monterey at the Monterey County Fairgrounds. Our host hotel was the Monterey Beach Resort — right on the sand in Monterey — could we wow our guests at the Specialty or what?

We were the first (and probably last) group to ever lay sod in the arena at the Fairgrounds — we not only put it in, we had to establish irrigation to keep it alive for the entire week of the Specialty — then we had to get it out of there! But, boy oh boy — did we have a nice Specialty! In 1994 and in 2000 we asked the local Portuguese community to share with us in the delight of these Portuguese canines. At each Specialty we hosted an authentic Portuguese Festa — with wonderful food and dancing compliments of the Portuguese social clubs in the area. We are truly fortunate to be able to call upon our friends in the Portuguese community to share our love of these  dogs and have a great time in the process.

When you pour over the Club roster — linger at the names that indicate ‘charter member’ and make note that these are the folks that most likely participated in each of the events described and they were the ones that got us into this mess . . . quite frankly, it’s a great mess we’re in and we have always enjoyed the enthusiasm, camaraderie and friendships that our dogs have brought us. It’s the charter members that got carried away enough to start the club and who always come through in a pinch — some  are the folks we see rarely now – but we know them as family and can always call upon them to help. Our family has enlarged considerably since that time many years ago and proudly, we have not lost the love and joy that originally brought us together, nor the keen interest in our dogs that make it all worthwhile.

So, here we are up to 2002 – we fete the 10th anniversary of the club, we fete our dogs and we take great pride in presenting the PWDCNC’s First Independent Regional Specialty. Another chapter to put in our Club history book!

Addendum 2004 – Since 2002 we have hosted a Regional Specialty each year in conjunction with the Del Valle Kennel Club show.  Each year the Specialty has grown and now includes supported entries both days of Del Valle, support for the PWDS in agility at the show as well as standard obedience, conformation and Sweeps. This is the annual opportunity to renew our enthusiasm and friendships in the PWD community.  We are fortunate that our friends from Southern California, Arizona, Washington and Oregon make this a regular stop on their show circuit.

Further, our club continues to grow and prosper and our membership rolls confirm this.  We continue to add new and exciting activities and have made many such events new standards of excellence (such as the annual grooming seminar, the water workshop, etc.).  In addition, we haven’t lost our lunatic energy that suggests we participate as co host club in yet another National Specialty.  For 2004, our club will again work with the Pacific Northwest Club in putting together a fabulous Specialty on the rugged Oregon coast.  This year incorporating for the first time Rally obedience as well as all of the other venues that have become the norm – conformation, sweeps, futurity, obedience, tracking, agility and terrific speakers, auctions and fine dining. Another fabulous specialty is about to begin!

It’s a club, it’s a support group, it’s a family of friends, it’s a 12 step program, it’s energy and camaraderie and enthusiasm and idealism all in one –
it’s our Club, it’s the PWDCNC! 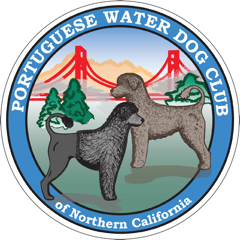